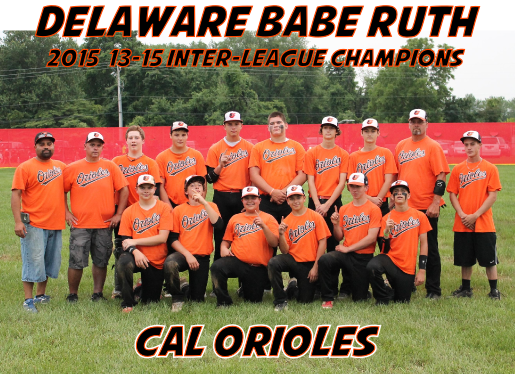 The CAL Orioles take game #2 in a 6-1 victory over the NC Rays to win the 13-15 Inter-League Championship.

Both the CAL Orioles and the NC Rays put runners aboard on Friday, but it was the CAL Orioles that were able to take advantage, pulling out a 6-1 win at Delaware City Athletic Fields.

The NC Rays had nine hits compared with the CAL Orioles' eight, but the NC Rays stranded nine runners on base.

Brandon Ferrara got it done on the mound on the way to a win. He allowed one run over four innings. He struck out seven, walked three and surrendered five hits.

Mark Kelly ended up on the wrong side of the pitching decision, charged with the loss. He lasted just four innings, walked one, struck out three, and allowed three runs.

The lead stayed with the CAL Orioles after the second, when they scored two runs on an RBI double by Tyler Shields and a groundout by Jimmy Arriaga.

In the third inning, the NC Rays pushed across their only run of the day on an RBI single by Isaac Brady.

COMMENTS
This article has No Comments.
Be the first to add your comments!
Click the "Post a New Comment" button below.
firstname lastname commented Just Now
×
"body"


Inappropriate comments will be removed by League and Team Managers.